A fun morning at encampment park! Centenary had both a table to offer coffee to visitors, as well as a booth for the UMW bake sale. Pastor Yvonne enjoyed laughs with residents, as she joked with them about how Centenary LOVES its coffee!

Carol and her husband, Sandy, Jo and all the rest worked really hard to make a nice sale and enjoy the morning at the event. KSL news was there, and interviewed those who sponsored the block-party and breakfast. Pastor Yvonne met with councilwoman Erin Mendenhall, who was out riding her bike for the morning. They had hikers who went out and came back along the known settler’s trail, with one of the traditional push-carts.

There were ladies in traditional pioneer garb, handing out information on the Mormon church and on this historic site. I thought it was interesting that the sign had “Donner Park” – which we all know the famous Donner party! I went and googled a website with the history, and those who were part of that sad chapter in U.S. settlement. Fascinating story, as it turns out in a round-about way that the Mormons would not have had their route for coming to Utah, if it were not for the Donner Party traversing the very same trail year before. Though of course instead of continuing on to California, early Mormons stayed in the Salt Lake Valley.

Pastor Yvonne mentioned how the event at encampment park has gotten smaller and smaller every year. Maybe it will eventually wind down or yet morph into something else, but for now a fun time for all, and Centenary rocks! 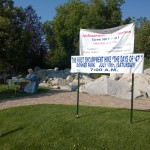 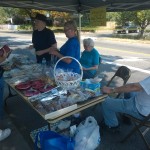 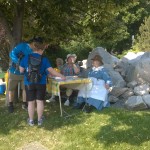 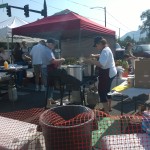 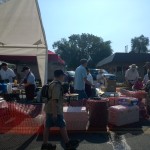 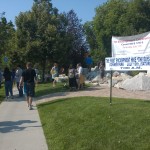 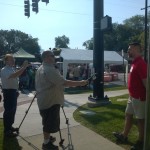 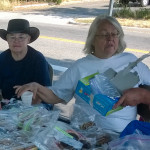 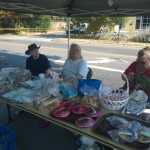 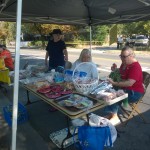 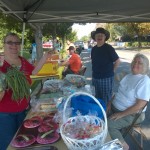 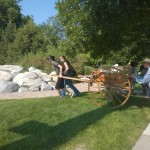 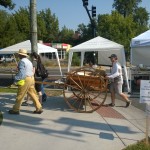 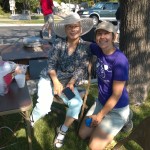 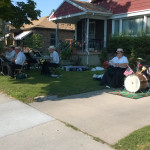