In 1892, The Rev. George E. Jayne was appointed to the “Salt Lake City Mission.” Apparently, his task was to start congregations in the new additions of the rapidly growing city. He met with success in Waterloo Addition, where a lot and building were purchased from the Congregational Church near the southeast corner of what was then Fourth East and Eleventh South (now Seventeenth South). The minutes of the June 1893 annual conference report, “The property there now is worth $1,600, and was purchased and furnished at a cost of $1,000 without help from the Church Extension Society. The Chapel was dedicated, free of debt, May 21st. The membership is 36 and they have been “very helpful in the benevolences.”

The first nine members of the church are recorded as having joined on November 20, 1892, and so we mark our beginning with that date. The church was named Second Methodist Episcopal (M.E.) Church; in a few years it became Waterloo M.E. Church; and in 1921, the name was changed to Centenary M.E. Church. The Methodist Episcopal Church, after going through two mergers, is now known as the United Methodist Church, and so our congregation is Centenary United Methodist Church.

The first building was quickly outgrown and a new building was erected adjacent to it, or nearly so, on the northeast corner of Fourth East and Galena, now Blaine Avenue. In 1920-21, we moved east one block and to the south side of Blaine where the current building was built, funded in part by the Methodist “Centenary” campaign- thus the name, Centenary. Our roots are deep in this neighborhood, having spent the entire one hundred years here.

A few months after Second M.E. church began, Rev. G.C. Waynick was appointed to begin a new work on the west side of the city. After a five week tent revival, nineteen members had joined what was to become Heath M.E. Church, later Grace M.E. Church. In 1975, Grace United Methodist Church was disbanded. Most of its members transferred to Centenary; and we have been blessed by their presence.

We have grown and declined throughout the years in numbers and activity. In 1956, Mrs. C.W. Wrathall remembered that soon after the present building was dedicated, the pastor, Frederick J. Cox, thought it was too large and ought to be sold to the L.D.S. Church, who had offered to buy it. She noted, “There were only 15 people in the congregation, but others felt that the new building should be kept, and that we should try to grow into it.” That growth happened, and throughout its life the church has bustled with energy. Now, with about one hundred members, we are engaged in discovering new life and ministries here.

The church has a solid history of faithful commitment. Two of the original members, Samuel Allison and Charles Campbell, became ordained ministers. In 1916, the church was ahead of 99.8% of all Methodist churches in the country in benevolent collections per member; the standard was a penny per day per member. In recent years, the church has been recognized for its support of various ministries locally and around the world, and individual members have been cited for their discipleship.

We celebrate the soul of this congregation! It is a soul that made Centenary “the church that refused to die.” It can’t be described in a few words or a single concept. It is found in the litany of the stories out of our past and in the confidence with which we face our future. The sign of it can be seen in the faces of our members whenever we meet together; it is alive in the service we do for Christ. We thank God for our church! 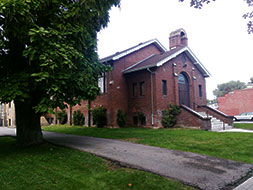 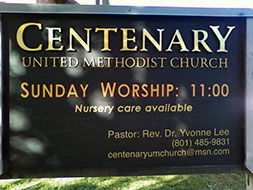 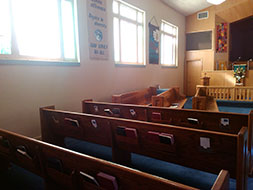